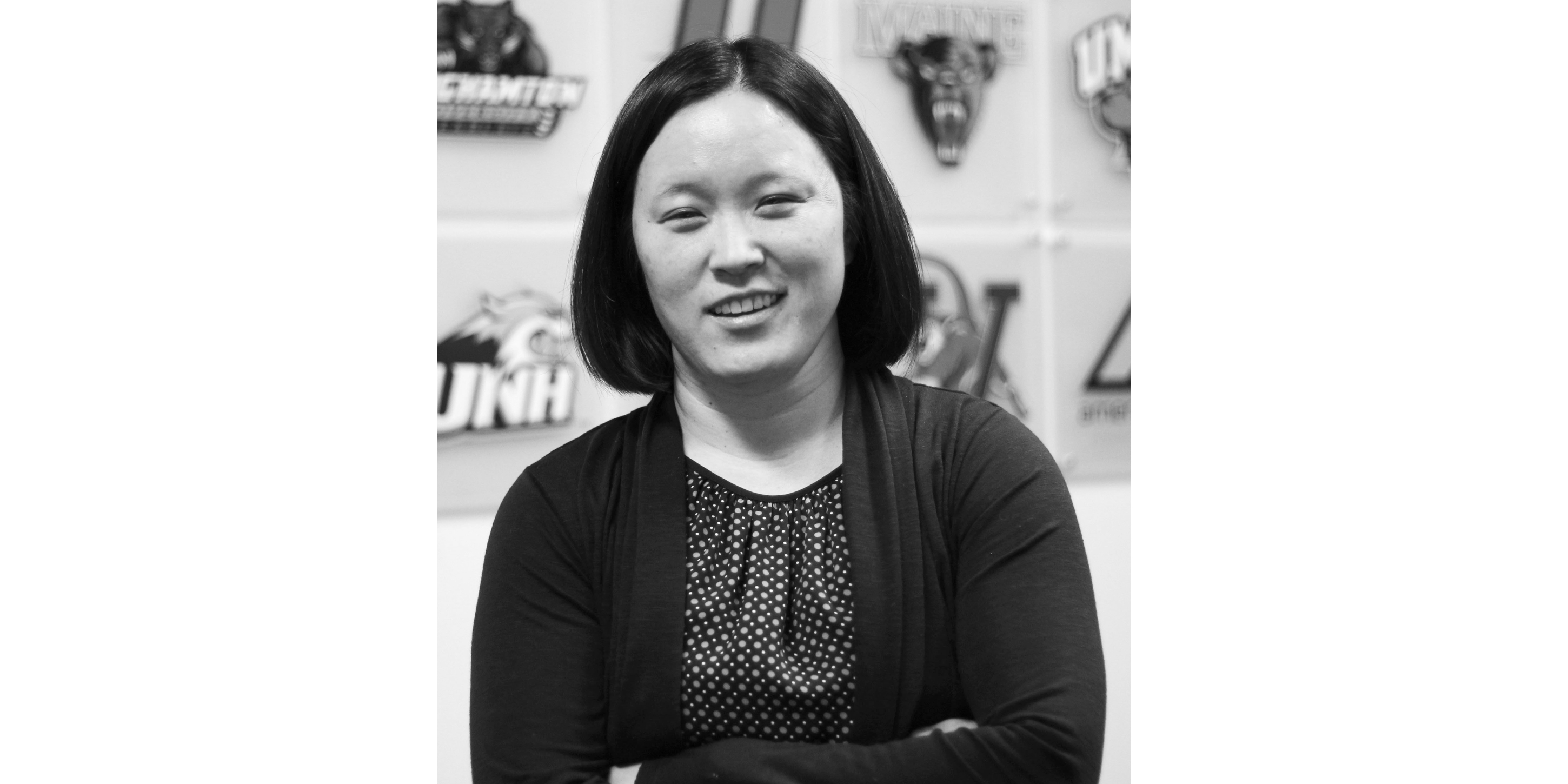 “You don’t need to do something grand or big — just do something. Because one step forward is better than zero steps forward."

How do you define yourself? Is it by your profession? Your background? A combination of both? For Amy Huchthausen, whose impressive career includes work with the NCAA, Atlantic Coast Conference, and currently serving as Commissioner of the America East Conference, articulating what she does is easy.  It’s defining who she is as an Asian American that’s a new process for her.

We sat down with Amy to learn more about the America East Conference’s DEI efforts, and how her experience growing up as Asian American continues to shape who she is today.

Walk us through your personal journey growing up as Asian American.

I was adopted from Seoul, South Korea when I was 8 months old to a [white] couple that lived outside of Minneapolis. My family did not expose me to anything about being Korean or Asian. I was fortunate that in our town there happened to be another family that had adopted three Korean siblings so at least there were three other people who looked like me.

I’ve gone back to think about what if those three kids hadn’t been there – what would I have done? I have no idea what the answer is to that question, but I knew even then that it gave comfort to know that I wasn’t too different, even though everyone else around me was white. I do remember moments where I was like, what is going on here? I am different and I don’t know what that means. I had a loving family that protected me, but I had no exposure. So, [I] just [went] through life and never really thought about being Korean or Asian.

“I remember moments where I was like, what is going on here? I am different and I don’t know what that means."

As I became an adult, there were moments [when] it struck me how much I don’t identify as AAPI. I was presenting in a session and a woman came up to me and started talking to me in a different language. I said, “I’m sorry, I have no idea what language you’re speaking." She told me that she could tell I was from South Korea [because] she had grown up there, so she started speaking to me in Korean. I was so uncomfortable at that moment. Now at 44, I finally understand why. When people make assumptions about you, they’re seeing something that you haven’t identified for yourself.

“When people make assumptions about you, they’re seeing something that you haven’t identified for yourself."

How has the recent news about violence against AAPIs affected you?

AAPI discrimination and violence [is] something that I’ve never experienced – at least not in an overt way. Maybe I’ve been blind to it…but I’ve been fortunate that nothing really harmful has happened to me.

[When] I read these stories, it’s really troubling, and it’s the first time I can honestly say that I have really started to think of myself as being South Korean, as being of Asian descent.

This spring, I was contemplating a trip to the Final Four and I didn’t go because it happened to be the week after the horrible incident in Atlanta. Thinking about getting on a plane with a majority of white people and potentially connecting in Atlanta – it just made me uncomfortable.

These are some of the things that, at my age, I’m just starting to understand better. I’m trying to figure out how I can educate myself, and also use the leverage and position that I have to effectuate change within the college sports industry.

Can you talk a little about America East Conference’s DEI efforts and how the Spread Respect Campaign started?

In the 2012-2103 academic year, we started what has now morphed into our Spread Respect Campaign, [which raises awareness to ensure equality and safety for all student athletes]. Our DEI efforts started in the LGBTQ space. When the political and cultural narrative in the country changed, we expanded our scope so that we touched on all dimensions of diversity, and that’s when it really shifted to Spread Respect.

You recently co-founded the AAPI Athletics Alliance, which is focused on building an AAPI community within college athletics. What prompted you to create the organization?

What are the goals for the AAPI Athletics Alliance, both now and in the future?

Right now, our first objective is to identify how many people within college athletics identify as AAPI, collect names, and then start building an organization with services. It’s a fairly ambitious effort, but we’re committed as ever to doing something. It’s unfortunate that it took tragedy to cause action, but I’m hoping that it can lead to something positive for individuals within our industry.

What are some things people can do on an individual level to be better AAPI allies?

I think seeing who among your colleagues have been subject to [discrimination] is really important, to [help] personalize it and bring it home. It’s so important to know your colleagues on a personal level, so that you can be an ally, so you know [what] things to say or not say, and to ask questions.

You don’t need to do something grand or big – just do something. Whether it’s reading an article, a book, or bringing a friend to something – just to do a little something. Because one step forward is better than zero steps forward.

What are some things organizations can do to uplift and support their AAPI employees?

As an organization, think about how you can celebrate AAPI Heritage Month, [and] how you can build-in things in a consistent way [outside of] the month. You shouldn’t do things just because it’s AAPI Heritage Month and then forget about it for the other 11 months. Try to identify ways to keep conversations active throughout the year, so that they become ingrained in us and we’re focused on them more consistently.

At Therabody, we believe in being true to yourself – listening to what you need, in order to make choices that are best for you. We believe it’s just as important to give our employees the space they need to be authentically themselves.

We know there’s still a lot of work to do in learning about the AAPI experience and understanding how our personal journeys shape who we are today, but we are looking forward to moving in the right direction.

For additional information on how you can support the AAPI community, visit The Asian American Foundation.