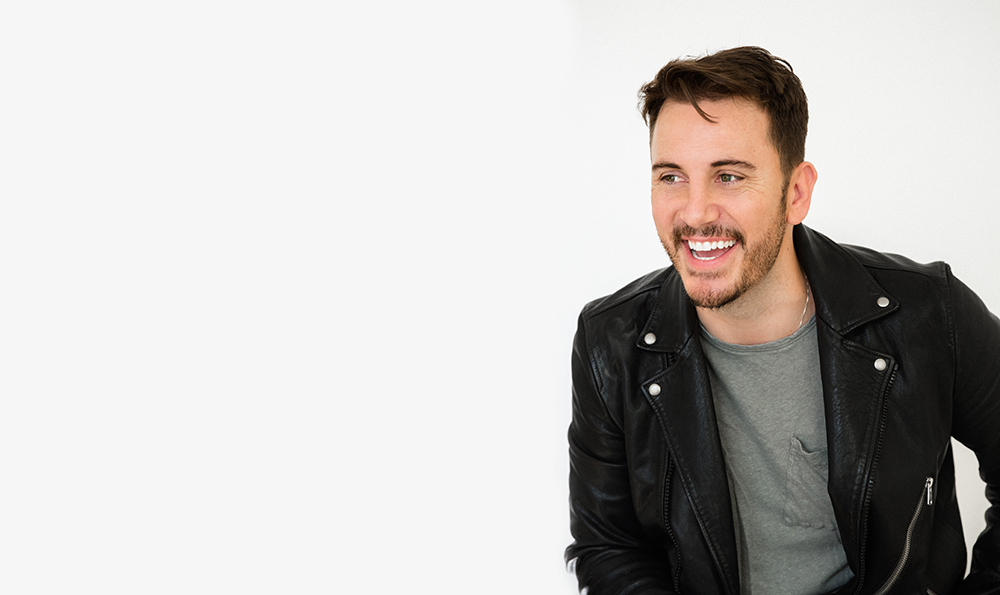 Wellness, Community
An actor, a Theragun, and a brush with meningitis. This is the KC Clyde story.
March 26, 2020

KC Clyde is an LA-based actor, living with his wife and small children.

Two years ago–three days after Christmas–KC woke up with what he thought was an earache. He had never had an earache before but all he knew was that he couldn’t sleep and that he was in terrible pain. At 3 AM, he went to the hospital and saw a nurse practitioner, who said it looked like the beginning of an ear infection. He picked up some Mucinex and some antibiotics and went home. The next day, the pain was now dull and he figured it was something he could manage.

He took his wife on a date to the Grove that night and by the time he made it to the other side of the mall, he started to feel sick and had to go home immediately. His head was pounding and despite never having had one, he assumed the pain he was experiencing was a migraine. In the short time it took to walk from the mall to the parking lot it was clear that KC’s motor skills were declining and that it wasn’t safe for him to drive. The pain was so blinding he could hardly open his eyes.

Once they arrived home he experienced some shaking which he attributed to a fever. He later found out that the shaking was caused by a seizure. As time progressed, KC’s condition didn’t improve, in fact, it got much worse. So much worse that he lost the ability to communicate. His body was going through a process a bit like frostbite: his brain began to turn off the functions that weren’t absolutely essential in order to preserve the ones that were. At this point, his wife called 911 and paramedics showed up only to suspect KC of being on drugs. His wife assured them this was not the case and urged them to admit him to the hospital because she was afraid he was dying.

From the moment a person starts to feel sick, they have approximately 12 hours before they go brain dead when they have bacterial meningitis.

KC was rushed into quarantine. At this point, his brain had shut off his ability to recognize people, places, and even things. He wasn’t about to speak and he was strapped to a gurney, surrounded by people who he didn’t recognize, one of which was his own wife. He was left without the ability to communicate to anyone how he was feeling or what he thought was wrong with him.

The pain from several knee surgeries and even a few car accidents (both of which he’d experienced) paled in comparison to the pain he felt when he woke up. He remembers 8-9 IVs attached to him and his whole body feeling like it was on fire.

The pain that meningitis causes in a body is unlike almost anything else.  Bacterial meningitis is an infection that causes nonstop pain in the body with zero relief. KC thought that he had an understanding of the horrors of torture, but this experience changed his perspective entirely. He remembers a moment where he turned to his wife– who was in a hazmat suit to prevent contracting anything herself– and said, “I don’t want to do this anymore." It had been three days of nonstop pain and the hospital staff refused to give KC any more morphine to ease his pain.

He was dealing with pain for 4 days in a row, he was unable to sleep and at this point, his muscles started to seize up. As his whole body is cramping up he’s also suffering through multiple seizures.

One of KC’s good friends had a friend named Lex. About a year prior to KC’s hospitalization, Lex had let KC and his friend borrow a first-generation Theragun. KC and his friend had played around with it and KC remembered that it was very loud but also very effective. So, while KC was in the hospital bed unable to feel most of his muscles except for when they would painfully cramp up, he thought to reach back out to his friend to see if he still had the Theragun.

His friend happened to be out of town when KC’s wife called, so instead, she went to the nearest pharmacy and purchased a consumer massage gun to try and help with KC’s pain. Unfortunately, KC wasn’t able to feel or notice any real benefit from that massage gun.

After about 5 days, KC’s pain began to subside just enough for him to start thinking about what his life might look like moving forward. The left side of his body was effectively paralyzed because of the brain damage he had suffered. He was still having seizures and he was having trouble moving the left side of his face.  He began to think about how this condition could have prevented him from meeting his newborn son; he thought about how his daughter was so young she might not remember him if he didn’t survive. He was so completely overwhelmed by emotion in this moment that things actually became very clear.

He didn’t want to live without being able to hold his newborn son with both of his arms. He refused to live and not be able to walk around freely the way he used to. He would not accept being a burden to his wife and his family.

He was willing to keep trying, willing to try anything. He thought again about the Theragun device he had tried a year before and he decided to keep trying to get one. His doctors had told him that the left side of his body desperately needed more circulation and he remembered hearing something about how the Theragun device was helpful in that regard.

Hospitals are not cheap and KC had been in the ICU for almost a week at this point. Money was a very real concern at this point so KC figured he’d make a video about his experience and send it to his friend who had once had the Theragun to see if he’d be able to rent it in the hope that it might be helpful. His friend received KC’s video and sent it on to Theragun and the video finally made its way to Dr. Jason.

KC was released from the hospital and at home when Dr. Jason showed up at his house with a Theragun for him. KC was still in a world of pain but was bravely and actively working on helping himself get better.

With a lot of hard work, perseverance, great care, and a little help from Theragun, KC was able to slowly but surely recover.

To hear KC’s full story and more on how Theragun helped him recover against all odds, check out Episode 1 of our Podcast, What Moves You